Me and My Mum

12/04/2022
Moments with genius - My mother sat with the look of a menace. There is a look that is family orientated that both my grandmother had and my Auntie Patsy, this would come over my mother’s face just as she was about to be brutal funny or wicked about something, which face it was most times. 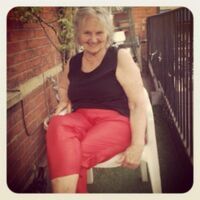 I am trying to recall my earliest memories of us together. Those memories are in dispersed with times of me without her. Each memory is as vivid as the other.

A difficult person to describe, as the persona of this enigmatic person changes with the wind. Each persona having a distinct expression and voice. And each one having its own distinct way of humiliating, belittling, and enchanting.

Distinct with her smell of cigarettes and her signature cough I always knew when she was walking up the road late at night home from the night club where she worked. We are in a flat in Stockwell, south London. I stand over her sleeping body on a day bed and pretend to cut her hair, she smells of almonds a nutty smell of urine and alcohol. Looking into a dressing table mirror, she dresses me in a mohair bolero and puts lipstick on my lips. We are going to the club to see Reggie. I have long hair and I want her to make it into lots of plaits, she said it would look silly.

I cry - I look for her in the church. She hides, I scream being dragged and kicking towards the priest furious as I did not want to have a wash. I cannot see my mother. I am three years old.
I am waiting for her to come in through the door to take me to the station, to be put on a train to Hastings to see my daddy, she is late, and I know I have missed the train. I just wait and watch the door. I am screaming at her through a closed door, she has pushed me away and shut the door between us, my dolls are sitting in a circle on the floor. I go quiet and sit on my own on the bed. My dolls are not real, and I am very angry. A toddler’s tantrum. She locks me out. I eat rice crispies and listen to them snap crackle and pop she calls me a mucky pup. I like that.

Standing on a table singing to a smoky room full of men in gangster hats, I hunt the sweetie.
The wallpaper in the bedroom is printed with roses, but they also look like pink puppies, I cannot stop looking at them, she is out at the club, and I know she will come home coughing, I love her cough as it is her. Reggie also coughed. Her mattress is full of money and it’s a secret.

Reggie thought it was funny to put his finger up my bum, so I did not like to turn my back on him. He also made me kiss his bunion that he kept in a powder compact box shaped like a grand piano. It was a hard piece of skin, and there was a ritual when he got it out, then I knew I was going to get a sweet. But I had to hunt for it. Mummy caught me touching Reggie’s bum and then the games stopped. I felt I had done something bad but was not sure what.

Mum was absent at my christening, at least I could not see her, and I knew something was up. I am still not keen on washing although I love to jump in the sea or a swimming pool, so it is not about the water. I put up the fight of a demon in the church, the reluctant Christian at the age of 3. Reason for her absence - she said she hid from me as she knew I would resist being taken to the font by a stranger. Duh?

September 2017, my mother sang “I was born under a wandering star” then put the phone down on me. Then I knew she was showing madness and dementia.

I never saw her with my father and all the photos of them together have been torn apart. The only evidence of them being together is in the beautiful drawings he did of her. He moved into a house in the Hastings old town called Margaret’s cottage he changed the name to Mariners Cottage then left it to my sister when he died so it never was Margaret’s or mine for that matter. And he showed me etchings of Goya’s Witches rotting in prison cells and screaming in groups like birds in dark skies he said “this is your mother and grandmother“.
A Ghost Story
Absence Presence
Next
Previous