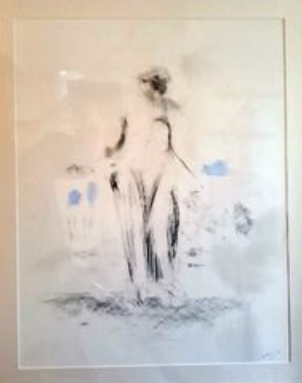 There was a time before antidepressants when death was my constant companion, I existed on death row merely because I had been born. Anxiety made me sweat blood That is what my mother told me. Death was my obsession her/his company protected me from profound aloneness. Then death broke my heart with infidelity as she visited my father and ran off with him and my aunty and a good friend and recently my mother.

We are in the same room because death stands quietly in a dark corner and just occasionally hisses at me with a reminder that life is now and to be experienced along with the pain of loss and endings and saying goodbyes. Death appears at the commencement of the ending of things and leaves me distraught.

I dream that my first born is a child again and on the brink of turning into what he is now at the time of writing this he is 39, and I am still helpless I watch events unfurl around him and I wake up knowing that my child is still lost. Watching my babies aging is a sweet pain. Could it be that knowledge of death is to show us that all is like dry sand running through your fingers and each grain a precious moment or a friend? My hyper-vigilance caused by the differences of living space, company, impermanence, and love.

People have defining moments in their lives that create who they are what they identify with
I think things happen between life and death, and that life and death are those two accidents interjected with a series of partings,

Leaving
I have
Left England
Left my family
Left land
Left the subterranean (deep sea)
Said goodbye to a sweet man
Did not say goodbye properly to my brother,
Wished I could leave the dogs bum warts, the cats crying, the beds, washing, drying, washing up, hoovering, the anxiety.
Leave being tired, guilty and me,
Leave my body and hover separate and dispassionate.
If I could make my spirit

be my own best friend
I might whisper in people’s ears “have some respect”, then I would leave like a night owl and they would not know how they know.

I would leave my senses
Leave my mind,
Then out of body I would
Take a double somersault and glide on my back over Hastings, wild and free.
Swoop down over the sea and rise in an instant and crow! Like a mad old hen singing her egg song.
Like a swan I would ballet and hoot my way through the old town, over the east hill and
I could freefall from the cliffs just for a joke.
Then circle the fishing boats and follow the silver river until I reached the moon, drop back to earth, taking elegant poses before I pike dive into the sea like a sharp arrow. A shaft of lightening into the sea. Deep down into the depths following the mercury path set by the moon to the bottom of the seabed
Sit cross-legged and turn into the Gorgon the medusa. With my hair snaking around me and hissing.
Then
Up up up
Up forever up
Break the surface and

The Origins and the Myth, I was born. My tribal narrative as soon as I was born, my family dispersed like bowling skittles and I belonged to a mother that yearned for freedom and despaired at my clinging need for her presence and love. The myth was that I was born deformed to the point of causing my mother so much despair that she wanted to kill me, my face twisted and my hair fuzzy and a crumpled ear and collapsed face. So close to life and death every time I heard the story of my origins.
Mother legacy is that not long after I was born my parents split up. Daddy taking my brother Richard to Hastings leaving me with my mother. This was a period from which she wrote her memoirs. Or perhaps her life began.

I at this time went from aunts to uncle to grandmother to family friend and best of all to Hastings. But always put back on the train back to London. And back into isolation and confusion. Train and traveling experience. I would do this whilst in bed in London and dreaming of traveling fast to somewhere else. The train or the ghost train is a strong image the sound of the clickety clack which could be reproduced by covering the ears with the cups of your hands and drumming your fingers on your skull, this made it very authentic.

The bogey man was real lived in the train, in the tunnels, where if you peered out of the window into the darkness you would see little doors, the portals into the deep dark dungeons where the bogyman dragged children and women, into a black and white etching world of Goya’s prisons and despair. The bogy man lived under the bed, behind closed doors, in bushes, on the beach and under water. Yet so close to death it was when I was in the vicinity of the bogyman that I was alive.

The difference between one place and another Hastings and London. In Hastings I lived and imagined, dreamed and felt, in London I was bewildered, belittled, and depressed.
Fairlight Beach
Memories of a Passing
Next
Previous