21/04/2022
About voice and decision making, taken from notes written many years ago. 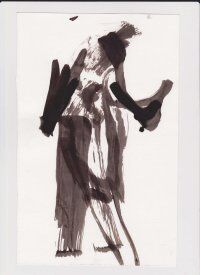 I wanted to gift myself something for my 40th birthday, stud diamond earrings seemed too shallow and had too much pain associated with them, I will tell that story one day. Lying in the bath, eyes closed and wishing, it came to me in a flash. it all made sense., I would sing.

I have had a strange relationship with my voice, I could shout well enough when i needed to , just like my mother, my voice could pierce through a crowd and hit its mark with Robin Hood accuracy. Standing on street corners shouting out whilst selling toffee apples in the market in London, or standing on a dinner table as a three-year-old dolly and entertaining my mums friends in a room full of smoke. not being able to pronounce my r`s or l`s the favourite song , which I had to sing over and over again was :- "everybody knows he`s left me, it’s the talk of the town" with the resulting hoots of laughter as it always came out "everybody knows he’s effed me."

The freedom of acceptance in the Stockwell Manor School Choir, howling freeform in the vastness of Dungeness landscape and the deep bodily groan of giving birth, same voice placement when my boy was sent to prison 20 years later..

The voice is a strange and revealing thing full of anxiety and fear, re-occurring dreams of silent screams, fear of talking too much, for fear of being found out. Speaking my words but hearing my mother’s voice coming out of my mouth , thinking "get me out of here" and instead saying " do you love me?"
being out of control of sentences words and my life.

So I booked up for a singing lesson, aged 64 I am still singing.
Artist, Self and Body
Lavender House
Next
Previous