My life in sound 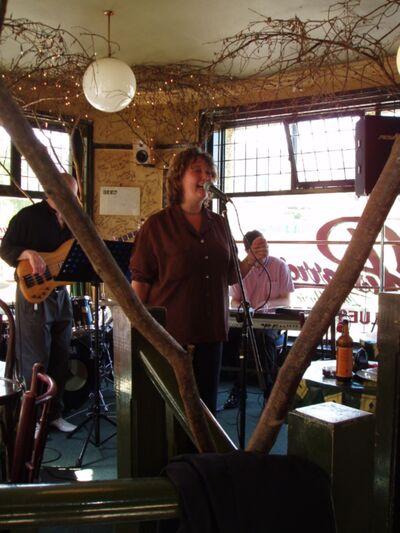 Singing with my band in Pissaros 2004
Me and music.

My earliest memories of music being moved to tears by Brahms lullaby; this was to the great amusement of my older sister who only had to hum it to squeeze pathos out of me. Now I associate the Brahms lullaby with sitting on a potty and being treated like a live dolly.

I also had the privilege of sitting with my father in the evenings while he played records, an input of Mozart and Beethoven along with musical scores, which I had the intuition to follow and recognise the peaks, troughs, and movements of a piece of music as it moved through time. This written musical language came to me easier than reading words and to my child’s mind made more pictorial sense.because the written music told a story which was directly linked to emotion. Something very close to a fairy-tale, or fantasy. All this experienced within the freedom of Hastings fairies and the bogyman who were very close friends.

Meanwhile in a parallel universe in Brixton the film score was to singers like Tony Bennet and Nat king Cole. sitting outside swaying pubs throbbing to a raucous chorus of “I left my heart in San Francisco”. While outside of this in the wings, rock and roll and jazz was speeding things up ready for the 60`s wild access to tape recorders and radios.

In Hastings the everyday sound input was either the sea wind and the sound of my dad conversing with visitors usually reciting Shakespeare or Dckens, discussions about drawing, the wild abandonment of my sisters laugh, our home was austere but full of humour. or the sound of frame making, we had no television or radio, this was against my fathers’ rules.

Or in Brixton the market with its street venders shouting to sell apples and pears lemons or tomatoes. Trains passing on their way to Victoria station, rattling over bridges that passed very close to my bedroom, the Lambeth town hall clock which struck every quarter of an hour, and gun shots.

During the day Brixton was filled with a skank form of janga reggae, which bought the shoulders up close to your ears and half closed your eyes and altered your breath and heartbeat to a nonchalant roll, the crowds, of all nationalities, lost urgency, and all cakewalked in unison and shopped like wavey sea on a fresh breeze.

This prescribed heartbeat created a rebellion in me, as I refused to comply. I would hop skip and jump in jagged stubbornness, anything to be out of sync..

Dungeness also had a particular soundtrack. Depending on the direction of the wind, Dungeness hummed, or screamed at night. With a distant passing of a train delivering to the power station. And the ever-present foghorn, that mournful monster that was invisible by day that perfectly filled a void. And during the day the ringing of grasshoppers and the passing of solitary private planes. from lydd airport This was the freedom and open space that I could scream in, where I was able to call out to God and the angels and ask them for forgiveness. The beginning of my faith in prayer and hope and capacity for realising there is an unknown.

We had a piano in Brixton after my father died. Hastings stopped and was no more. And my sister bought me a piano. I was to have piano lessons but very like the chaos that scuppered my schooling my piano lessons went the same way. In that they were non-existent.

But the piano was there, and I would go to it daily and experiment, about the same time I was given £15 to buy a guitar, there was a shop in Shaftesbury Avenue, in the west end of London and I played the E minor chord on every guitar in my price range. The salesman was so patient with me, and I ended up with my guitar which was to be my almost constant companion, I say almost, as it did spend some time in prison with one of my naughty uncles. I played and sang every day, another passport to freedom and a rich inner life.
NEW PHASE
Memoirs
Next
Previous